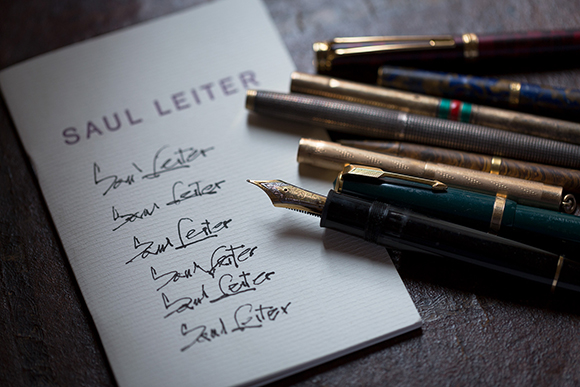 I met Saul Leiter for the first time in the kitchen at Howard Greenberg Gallery. He invited me to his home, and as a great admirer of his work, I gladly accepted. Thereafter, every time I visited Saul’s apartment in the East Village was a magical experience. We talked about art projects, current affairs, old Japanese prints, coffee and cats. The conversation was full of humor, laughter and compassion. I always found myself drawn to the tall glass windows and cracked plaster walls which embodied the passage of time.

In 1946, a 22-year-old Saul Leiter quit his rabbinical studies and moved to New York. Against the wishes of his father, an internationally recognized Talmud scholar, he chose a dream of becoming a painter. Saul moved into an apartment at 111 East Tenth Street in 1952 and for more than four decades, he and his companion Soames Bantry shared a life of art together. Saul died at home peacefully on November 26, 2013, at the age of eighty-nine.

Three weeks after Saul’s death, I was granted permission by Margit Erb, the director of the Saul Leiter Foundation, to photograph the inspirational interior of Saul’s apartments. No.4 and No.15 were filled with a profound silence, yet I felt his spirit in the air and in the objects he had left behind. Today, only apartment No.15 remains as the headquarters of the Saul Leiter Foundation.

Five years later, the Saul Leiter Foundation permitted me to return and photograph Saul’s belongings. He left a myriad of photographs, paintings, watercolors, notebooks, cameras, undeveloped film, color slides, watches, letters, books, Talmud, little straw brushes and keys. Saul’s objects tell us about his personal life as an artist. They reveal Saul’s deep love for Soames and the complex relationship with his parents and his sister.

<Saul Leiter> is a biographical work that depicts the interior and exterior of Saul’s apartment along with his objects. Saul lived on East Tenth Street for sixty years. Within a few blocks of the East Village, he found many beautiful things, which brought to life his belief that “mysterious things happen in familiar places”. It is my hope that the world will discover another facet of Saul Leiter through my work.