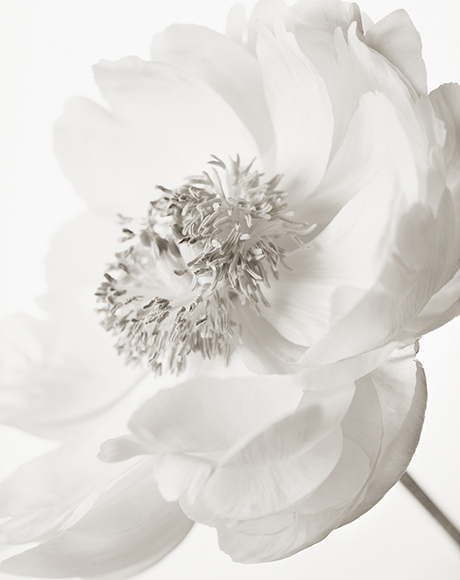 It began as an encounter with whiteness.

I first discovered the photography of Yumiko Izu at a gallery on the outskirts of Woodstock, New York. I was immediately struck by her mysterious backdrop of white, which, like a fog, seemed to envelope—or, more precisely, absorb—the flowers at the center of each photo. Flowers, it occurred to me, weren’t the object of Izu’s attention and interest. No, it was whiteness that captivated her.

Several years later, on a visit to Izu’s lakeside studio, I met up with the flowers again. On this occasion, my encounter was one with blackness.

Tranquil blackness. Rich, intense, velvety blackness. A blackness residing at the center of her artistic vision. Recently seduced by Faraway, Yumiko’s photos of animal skulls, I found myself utterly enraptured by her world. In a flash of awakening, I beheld a garden in which white and black—life and death—were laid side-by-side, entwined, allowed to flourish and bloom.

Gazing continuously—standing in the midst of this garden–a strange reversal occurred before my eyes. Once black; now bright, beautiful, articulate—the decaying, rootless flowers emerged from their protective sphere of blackness, coming to life, as if darkness were the motivating principle of their lives and vitality. The beauty of whiteness, by contrast, seemed violent and imbued with terror. A terror infinitely close to death. The stark white of funeral garments. The whiteness of bleach. The return to a blank page. Fastidious, pure, exclusionary white. If black is the seductive color of darkness in the world we inhabit, white is the merciless nullity of the afterlife.

Seeing the reversal of black and white, of life and death, I experienced a realization: The “beauty” encapsulated in Izu’s flowers is both the brief spark of life and inevitable sigh of death. At the same time, her flowers are an embodiment of a soul that none of us has yet witnessed.

From the moment of our birth, we progress, steadily and surely, in the direction of death. Consequently, living can be equated with dying. In Izu’s art, we are able to behold the afterlife—a zone of tranquility, a hiding place for the spirit.

“Keep this to yourself. Preserve this as our secret,” whisper the flowers. In their embrace, we’re unable to escape, unwilling to flee, entranced by the secret pact between life and death. At home, in the Secret Garden.