Faraway: The Extremity of Darkness 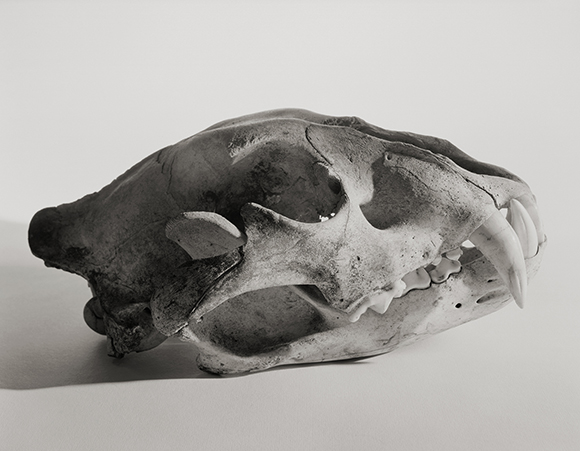 Cool to my fingers in the stifling summer air, the skull of the elephant exudes tranquility. Sunlight filters through the trees, dancing on the bulky curves. I gather up the skull with my arms, measuring its heft. When my palm slides into an indentation, an image of the skull, naked and decaying on the plain, drifts to the surface of my mind.

The skull of the bear rustles as I lift it. Stealing a look inside, I glimpse a pair of leaves entangled on a cobweb, remnants of autumn. Insects, like minute grains of sand, squirm on the skull’s edge. At one with their host, they scatter like froth from a breaking wave. I press down on them with the pad of my index finger, but they return to their doings, marching in an infinite line that reconnects with the earth.

On a cold midwinter afternoon I discover the deer skull, still tufted with fur. I bring it home, lay it on a snowbank, spray water from a hose to dissolve its brown pedestal of dirt. Clots of blood speckle the cheeks, conversing with hairline cracks in a dense and unfathomable dialogue. Its twisted antlers rise before me eyes like the twisted branches of trees, recalling the deeply wooded forest.

As I await the end of my camera’s lengthy exposure, I hear—or, perhaps, imagine—the faint echo of bones stirring, their essence emerging. Arrested in dull illumination, the skull of the giraffe reveals its refined outline and the vacant expanse of eye sockets. Bones, bleached by the years, scarred with numberless cracks and clefts. Particles of dust, minute and white, stirred by a vagrant breeze. Beneath the crystalline surface, a helical ocean, twisted like a shell, is buried out of view.
The mysteries of existence silently congeal in a brittle, enticingly beautiful carapace.

Holding my breath, I attempt to follow and entrap the subtle residue of life within. In an instant, it is apparent that I, the observer, have become the observed. Fragments of a dead animal’s memory, lost to time; myself, the gatherer of those fragments. The murmur of a continental plain, the scent of rain-moistened soil. A horizon lit at dawn, the dazzle of stars in spring. Each layer of our universe is penetrated by the transparent particles of time. And, at the distant terminus of time and space, life and death—embraced in my peaceful reverie—are reversed, rearranged, become one.